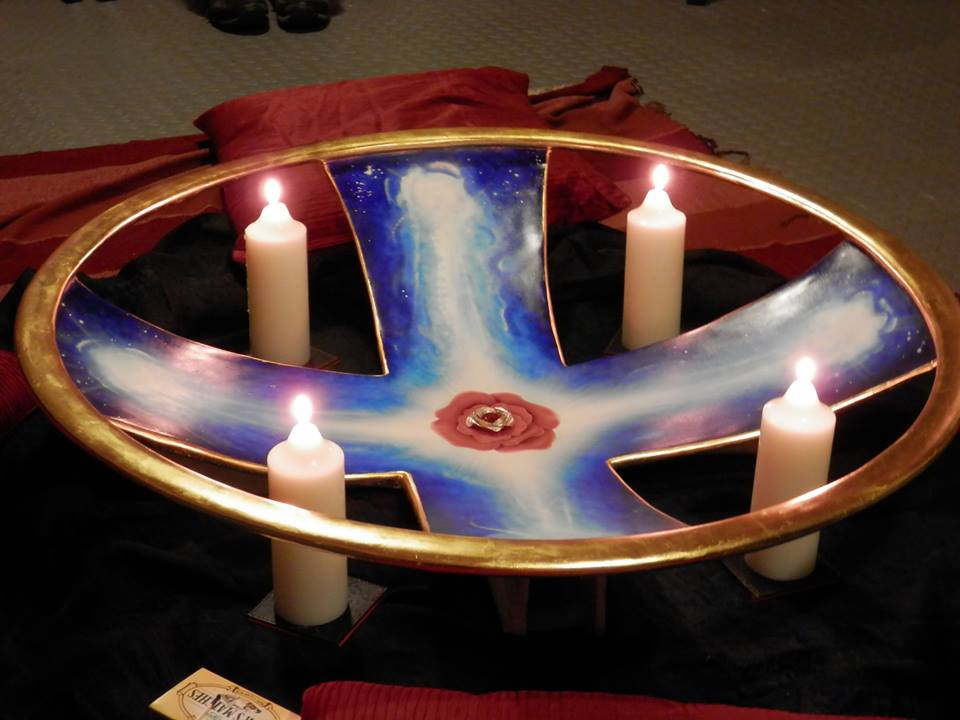 The Two Roads Symbol is a symbol of cosmic oneness, peace and harmony among all of creation, animal, vegetable and mineral, coming from and of four pillars of the universe, earth, air, fire and water. These four pillars on higher levels equate to south, west, north and east and to emotions, body, mind and spirit; and it is through all levels of these four essential aspects of creation that this prayer ceremony is intended and healing is returned in the revealed truth of Creation. The four pillars are represented on four levels of consciousness, and they are the physical level, the astral level, the mental level and the level of pure spirit; each of these levels are present within the ceremony: they are you the petitioner, the spirits of those loved ones prayed for, me as the intercessor, and four lights of the Eminence of God, The Eternal One.

The ceremony begins with four petitioners positioning themselves at the four directions of the symbol. The petitioners are connected through the circle and aligned thus with all directions. The spaces between petitioners are occupied within the invisible worlds by those loved ones prayed for. Each petitioner may name the occupant or occupants of the spaces if they so wish to, and then light the candles between the spaces for them. I will then invite the four lights to be present within my energy field; as soon as they are present the ceremony will begin.

There will be a short prayer of gratitude and honour for all those souls present. Then I will lead everyone in a meditation to raise the consciousness of the physical presence.

The main prayer will be spoken by everyone physically there. Then the prayer list will be passed around and each person may speak the name of someone they wish to be prayed for, or speak one of the names on the list. I will then speak out some of the names on the e-list.

There will then be a closing prayer.

There is now a time for anyone wishing to speak about prayers answered.