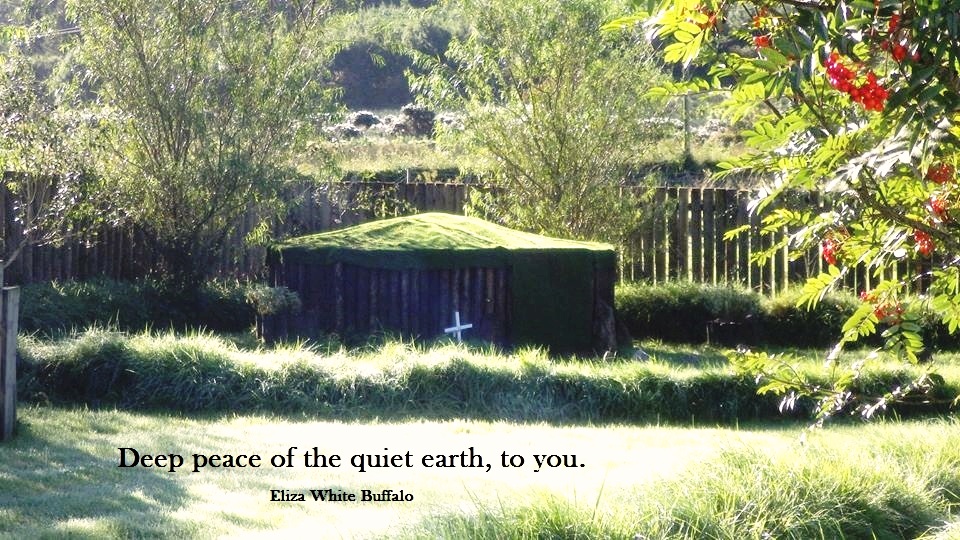 The Sound/Peace Chamber at The Two Roads Centre

THE PURPOSE OF SOUND CHAMBERS

To date many Sound Chambers have been completed around the globe, including in areas as widespread as Australia, Austria, Canada, Germany, Norway, South Africa, Scotland, South America, and the United States; others continue to be built. Each of these chambers has its own integrity, purpose, and particular qualities. Each is the result of the committed efforts of a few individuals.

The chambers help us to access wisdom from an ancient source. They act as a mouthpiece for the higher mind to amplify the call for that which we need at this time on the earth, and they help all who walk upon her. By building
chambers on the surface of the earth, a web of light is created so that a person making sound inside a chamber sets up a continuous resonance around the earth.

All chambers have a spiritual generator. They generate twenty-four hours a day and they are going on now. They will continue to be active forever like the first chamber I built in Bernalillo. It no longer exists in the physical but was carried up to another dimension where it is still active. When people come and want to build a Sound Chamber they think they are calling it in because they love the idea. Really the chambers are the ones that call us, and then we decide to build them. The energy that the chambers are broadcasting is calling the people to come to be part of the chamber community.

We are each made from music. Every one of us was creatively inspired from our dreamtime. Our creator made us from principal ideas, or fundamental truths which inhabit and govern the cosmos. Our main purpose in life is to dialogue with the self-empowering qualities of these principal ideas that
were instilled in us, and in the physical beauty of the earth.

Working as a group, people then become a collective instrument of the resonance of beauty for a particular sound. Each Sound Chamber would become its own syllable signature because of its placement on the surface of the earth, and each chamber holds a specific purpose. That specific purpose
or principle idea would be amplified by the geological and geographical sound particular to each place.

In a chant, the vowels carry the essential meaning or fundamental truth embedded in each syllable, and the consonants propel, or give form. Like ripples across the lake, the sound waves move out into the earth from each chamber. These waves then open the earth to healing from the ancient
sacred places where wisdom has been stored for countless eons.

the sound/peace chamber at The Two Roads Centre

was established in 2014.  However, in 2003 it called to me whilst I was in another place.  I had a vision in which I was standing on the spot where the chamber is now.  All around me I saw the environment of the mountains and trees, and even the house where I would live. One week later I found the place and then I bought the house and grounds.  A message from Spirit was given via my soul sister Lu, and the message was that the sound/peace chamber would be manifested in the spot it is now.  In 2014 it was erected from the centre of the earth.  It reflects the star people’s intelligence, and connects it with Earth through our bodies so that we experience our higher selves coming through and into being.

A re-birthing session can be booked as below…or a sound session if you prefer.

Or both can work together – FOR BOTH you would need to book a full day- so 2 hours in the morning, a break, and then 3 hours in the afternoon.

Both Re-birthing and sound session day for 2 – 6 persons: